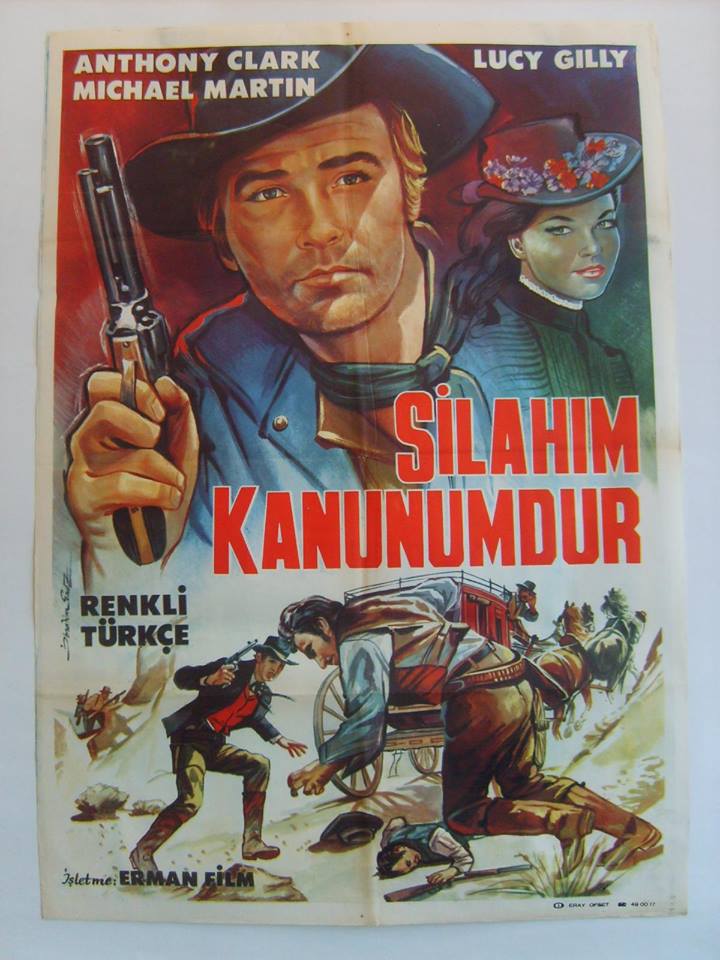 THE COLT IS MY LAW is kind of a Euro Western throwback to the classic era of Western B movie fare, with a "masked avenger" type hero that clearly has more in common with the Lone Ranger than anything from the Sergio Leone/Sergio Corbucci realm of Spaghetti Westerns where style and attitude became more important than substance of story. By contrast this movie is all about substance and story to the point of actually being quaint. It is from the era of European made Westerns when the cowboys all dressed in color coordinated costumes that looked fresh out of the studio wardrobe department, the women were all matronly boarding house madams or freshly-scrubbed damsels in distress. There is even time for a rousing musical/dance number, and in the end the good guys win and the bad guys are led off to prison for their dastardly deeds.

The story revolves around one of those odd looking Euro Western frontier towns built out on the studio lot where a rash of gold robberies is plaguing the honest folk. Two strangers arrive in the weekly stagecoach with markedly different intentions: One is a ne're do well rough-houser looking for work, the other a prim dandy. Soon the gold robbers find themselves opposed to a heroic masked hero who wages a one-man war against their crooked schemes, winning the heart of the pretty leading lady and the admiration of the town bigwigs, though just which one of the two is our heroic masked man remains a mystery until the end.

There are shootouts, fistfights, lots of desperate rides to save the day -- In other words the usual standard Hopalong Cassidy kind of thrills & chills, which for an Italian made Western is a rarity indeed. As such for my needs this is a pretty interesting example of the Euro Western in it's transitional era when it evolved from trying to ape the classic 40s/50s approach to making a Western and became an art form unto itself. There is a visual tension to the fabric of the film where the arty atmosphere of Euro film-making style is contrasted by the downright ordinariness of the movie's execution. Even the music is somewhat forgettable which is surprising given the importance that the Italians usually placed music with in their Westerns. Here it just works to flavor or color the action taking place on screen rather than being a storytelling motif unto itself ala Ennio Morricone, even though it superficially sounds similar to his DOLLAR film scores and the movie superficially resembles the Leone approach.

But only to a certain degree. If you contrast this film with WINCHESTER BILL, for example, you find characters in that film who are genuinely larger than life and a visual language that is more based on stylistic dynamics rather than a slave to the needs of the plot. There is only one shot in all of this film that stands outside of the need to tell the story and that is the final one of a pistol lying forlornly on a boulder overlooking a valley, perhaps a visual metaphor for how Brescia had sensed the genre changing while making the movie. His next Western would instead be made in the new frontier of Spaghetti, though that's not meant to be a detraction from this effort. It's not necessarily a bad movie, it just wasn't concerned with the artistic intent that would make the genre special.

5/10 Middling Italian-Spanish Western with habitual actors , customary scenarios and realized in Chorizo/Spaghetti style . The film displays thrills , noisy action , violence , shootouts , final twist and being enough entertaining . The movie contains typical particularities Spaghetti , as it is full of fury , sadism : bloodbaths , and close-ups of grime-encrusted faces . This is an average Spaghetti Western with some moments genuinely entertaining if you can avoid thinking too much . The town of San Felipe is plagued by robberies . There arrives George Benson (
Tweet